Please save the GIFF (long click) on your phone and play it full screen.

Set the brightness to the maximum and place the sphere on the center of the screen. 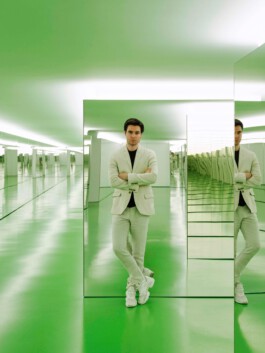 Roland Burkart (*1990 in Montpellier, FR) is a French and German artist based in Berlin, DE. In his drawing, sculptures and installations, Burkart explores the interaction of spaces and bodies, of architecture and movement. People always perceive themselves in space: situationally through their intuitive sense of orientation and abstractly through the projection of spaces on maps. At the same time, space itself has an effect on the subject, can prescribe movements, demand decisions, and give possibilities within a fixed framework. Moreover, spaces are always spaces of reflection in which people determine their position in their respective environment or even in the cosmos. In his works, Burkart creates spatial constructions that bring these questions of perception into the present in an abstract and reduced formal language and make them aesthetically tangible.

He studied at the Academy of Fine Arts in Munich with Peter Kogler, Kerstin Brätsch and Florian Pumhösl. In 2014 he was part of the Autocenter Summer Academy in Berlin with Carsten Nicolai. His work has been shown at the Kunstmuseum Celle, as well at the Kunstverein Munich, Galerie Christine Mayer, Munich, and at the Mattatoio in Rome. Burkart received the Bavarian Culture Prize in 2017 and the stipend of the Stiftung Kunstfonds in 2020. Roland Burkart´s works are part of renowned collections like the State Collection of Prints and Drawings Munich, the Munich Re Art Collection and the Helmholtz-Zentrum Collection.